During the creation of Act of Treason I typed up a document. A Design Journal, intended to show publishers the rationale behind the game mechanics of Act of Treason. If a publisher ever wanted to make changes to Act of Treason, I had to be able to back up my position. The document served as a nice reminder to myself for the reasons behind some of my choices. What I could and couldn't afford to change and why. 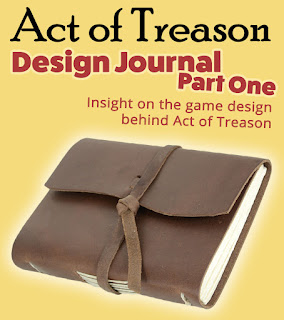 In the interest of helping future designers I'm happy to share this document This reads as an FAQ, trying to answer questions designers or publishers may have for me - which I think is the best way to lay out something like this. it's a good way to sort through the creative process and to map out the choices you've made.

As a designer, if you have robust rationale behind each question you are asked, then that's a good place to start! If you don't then you seriously need to consider a redesign, or at least be prepared for it not to work when putting it to the test. If something just works and you can't explain it - that just means you need to work harder to find out what the reason is! There is a reason for everything! If something is broken you need to find out why! If something is working there is great benefit to knowing why! Everything has a reason, so you should be able to make a document just like this one - but for your game, or any other game worth their salt for that matter. You should be able to explain the why.

There was quite a bit of text from the design document so I've broken it up into four parts which I'll be releasing as I feel like it over the coming weeks. I've tweaked it a bit and added some parts to keep it up to date. Unfortunately the first part is a bit less juicy in terms of design than the others, but hopefully clues you into my frame of mind as I was designing Act of Treason.

Synopsis:
This document gives an overall view on the mechanics and design choices behind Act of Treason.

The idea for Act of Treason came about after I played similar games such as Mafia, Werewolf, The Resistance, and especially Battlestar Galactica. Having played these games, I noted several improvements could be made on this genre of game - the most important improvement, is that there could be much more in-depth social play where persuasion, deduction and deception are important and highly rewarded - players would win or lose based on their social skills and wit alone. I do not think that games currently in the genre capitalize as much on this as possible and I wanted to make a game that did.

I feel like Act of Treason has hit these design goals - Act of Treason should be easy to understand, and yet challenging to master. It should offer a slight increase in complexity when compared to existing games in the genre, but offer much more depth when it comes to the strategy and the tactics one can take in order to win.

To name a few improvements:

• Players have multiple avenues of influence, through individual actions, tribute, and, most importantly, social interactions. If a player is eliminated, it will be likely due to their actions, and not luck (although luck can play a small role). This is in contrast to say Mafia, where players have very little influence on the game and luck can take a major role. Players can vote in Mafia to try change the outcome, but that's about it for most players. Act of Treason has taken steps to ensure that players have a high degree of influence on the game, and that the influence never fully outs them as a Traitor, a Loyal or an Heir. I've seen amazing tricks to deceive others. One example is faking to be the Heir (while loyal) to provoke a Traitor to attack and expose themselves. Or you can fake being the Heir (as a Traitor) to prevent being eliminated by loyals. Another example is dropping an additional card into Tribute and then lying about it afterwards to throw off suspicion that it could be you who caused Tribute to fail. There are lots of viable strategies in Act of Treason!

• Game length gives you the time to investigate and allows you to build up a case based on historical actions, and other historical evidence. Contrast this to say One Night Werewolf where players are given almost no time to investigate, but more importantly, almost no historical actions or evidence to go off of. The most noticeable difference here comes down to the skill vs. luck between these two games. Act of Treason allows you to tap much more into skill because it allows for this increased game length to acquire evidence and position yourself for late game.

• Game length in Act of Treason also gives the advantage of slowly building tension, a great example of this is in the modern video game called Playerunknowns Battleground (PUBG). Games of PUBG last up to 30 minutes with a map that reduces in size as players are eliminated. Because of the time and effort investment as well as the increasing of intensity, the end of a game can be extremely intense and rewarding. This is akin to what happens in Act of Treason. As the game runs on, players become more emotionally invested in the outcome - there is a lot of time and effort invested and still so much potential for change. Like pubg, the investment, time and tension often leads to a very exciting finish. Because of the nature of Act of Treason, play times can vary a bit. A short game can be caused by the Traitors or the Heir making a mistake. A longer game is almost always caused by players partaking in longer engaging talks - trying their best to persuade, trick or deceive. Longer doesn't typically mean bad in Act of Treason, and conversely a long game has players fully engaged and invested in the outcome which is a good thing. In other words some of the best games of Act of Treason can be the longest.

• Mechanics are put in place to help ensure that players are eliminated at roughly the same time in Act of Treason, near the games end. This is to ensure that players do not have to sit out for a long period of time. Contrast this to say Mafia, where a players are eliminated early based on very little or no evidence, or The Resistance where while there are no 'eliminations' players can be excluded for many rounds at a time, pseudo-eliminating them.

What do I consider the weakest points of Act of Treason to be?
• The upper player limit is a bit on the high side with 5 players needed at minimum. While this doesn't adversely affect play and is great for big groups, it does mean it can be tricky to get a game together for some people. It seems to be the nature of the beast for Act of Treason, and I have been unable to find a suitable solution for lowering the player count below 5.

• Act of Treason is a bit more complex when compared to some of its predecessors such as Mafia or Werewolf. Again, this is unfortunately the nature of the beast. I set out to make Act of Treason a more socially tactical game - and in order to do that it was very likely the complexity would increase. I'm proud to say that I have taken considerable steps to reducing the complexity so it is no more complex than it needs to be. I imagine that most boardgamers would be able to take on the challenge of Act of Treason (there are certainly more complex boardgames on the market). However more casual gamers or younger gamers may struggle with their first few games - but they can certainly learn it with persistence!

Why is there an Heir?
The Heir is arguably one of the most important mechanics in the game. Act of Treason isn't the same when there isn’t a Heir. I briefly toyed with variants that didn't use an 'Heir' mechanic and they failed, quite spectacularly. The main reason to have an Heir is so the Loyals don't want to kill anyone - One side needs to fear needless killing while the other side needs to profit from it. This is one of the dynamics of Traitor vs Loyals + Heir in a nutshell - The loyals don't want to kill needlessly in case they hit the Heir and lose. Without the Heir, the game turns into a bloodbath.

Furthermore, Traitors and Loyals both have reason to pretend to be the Heir, and the Heir has reason to pretend to be a Loyal. This means that all 3 types of characters have cause to act similarly or act as another, and that makes it difficult to identify a player’s loyalty by their actions alone. This allows the great acts of deception and intrigue that we see in Act of Treason during game play.

This all happens because there is an Heir. As you can see, the Heir is a character that is at the very core of Act of Treason.

Why is there Player Elimination?
It could be said that The Resistance or Avalon doesn't have player elimination, but I would say that it kind of does. If a player is excluded from the rest of the game (by being removed from checks) because they are a suspected Traitor, then this almost like they are eliminated. They are not actually eliminated, but they might as well be - the effect is the same.

Act of Treason seeks to correct this by holding off on eliminations until the end of the game, where you won't have to wait long before the game is over and you can start another. While eliminations can occur early, this are rare, and it does come with a cost - another player will have to trade their life and Tribute becomes harder to pass which speeds up how quickly Kingdom Strength is lost. The chance of being eliminated early and having to sit out for a long time is very low.

I often tell my playtesters that killing players triggers the games end. It’s all downhill after that. This is how it's designed, and this is how the game plays out very often.

Tune in next time for the following:
Why 5 to 10 players?
How does the game usually play?
Why is there a Steward?
Is the Steward Role too powerful?
What stops the Steward Role from 'bouncing' between two players?
Posted by Act of Treason at 02:50