Note: I think the most useful application of this document is as an example, to assist in making your own Design Journal for your own game. There are many benefits to making a 'Design Journal' as described in Part One. 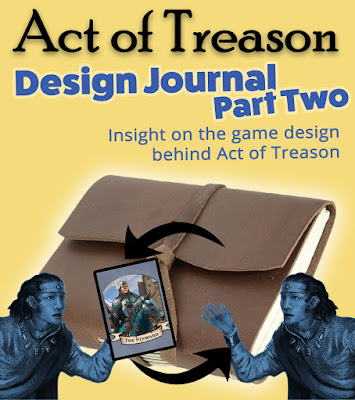 Why 5 to 10 players?
5 is the minimum number of players required to play Act of Treason, while 10 is the maximum. 5 to 8 is a good player range in my opinion, with 6 or 7 being the best.

With 9 or 10 players, the game becomes a little harder to manage, and takes a little longer to play. The game still works of course, but playing a nine or ten player game with all new players is a tad difficult, as new players add additional chaos and length to the game. The player limit stops at 10 for this reason. I think the game would become too unruly, especially for new players, if the player count was 11 or more. And lowering it to 8 or 9 players would cheat experienced groups that wish to play with more people, and can do so comfortably.

Lowering the minimum number of players would be good, but is difficult without warping how Act of Treason currently works. Even if it could be done, Act of Treason is a social game and doesn't suit well to so few players. With only 4 players, there is not much room for social interaction and figuring out who is who. For these two reasons, Act of Treason is just not well suited for less than 5 players.

While a minimum of 5 players might be difficult for some groups to pull together, the player count can be seen as a great opportunity to meet new people. Socializing is often easier if you have a catalyst to help facilitate conversation. Act of Treason would make a great catalyst, as it provides an opportunity to socialize via the game as well as just casual conversation - swapping back and forth between the two as the game progresses. It would make me happy knowing that people were running games of Act of Treason at their local game stores around the world and using Act of Treason to meet new people.

Not only that, but playing Act of Treason with a batch of experienced players who you don't know that well is my favorite way to play. This is because the dynamic at the table changes with the players, much like how the social dynamic changes when you have different people in a room. This can provide you with a whole new play experience. Playing with new players adds another level of unexpected outcomes that you may have to navigate - a new landscape that you need to explore if you want to win.


How does the game usually play?
Each game will start off slow with the players organizing the group and focusing on passing Quests for the most part. This early stage of the game is mostly about gathering evidence on who is who based on their actions. It's giving the players an opportunity to set themselves up for mid and late game. As the Kingdom Strength drops, so will the players suspicions rise. Players will be eyeing each other up and taking note of every action and word. As we near the late game, Players will use their evidence gathered and their suspicions to weaken potential threats while securing the positions of themselves and their so-called "allies". Assassinations tend to hold out until the last round or two where many players will likely die in a bloodbath - a last ditch attempt to root out the Traitors. The Loyals attacking the suspected Traitors, while the Traitors try to influence the carnage so that they are not in the firing line, and perhaps taking a pot shot or two of their own if it doesn't increase suspicion against them! All the while Traitors will be keeping an eye out for the Heir. They may need to make a last ditch attack on the Heir if it comes down to it!

Note that the Traitors can win if Kingdom Strength hits '0'. This rarely happens as Loyals will try to win by killing those they suspect before this will happen. The Loyals can win by completing 5 Quests successfully. This rarely happens as the Traitors will place negative cards into Tribute to try ensure this does not happen. This is why most games always end assassinations.

Experienced players tend to play differently when compared to new players. It's exceptionally difficult to describe all the tiny things that goes into the difference between these two sets of players. However, One of the biggest differences is that experienced players develop a 'social contract', of what's good for the group. With familiarity of the game the players develop an understanding of how all players should act for the good of the realm, and deviating from this raises suspicion. New players cannot capitalise on this, as they don't know what good for the realm entails. New Players will often try act in self interest as there is no penalty from their peers in doing so. One of the toughest things with designing Act of Treason was to correct for this so that the mechanics encouraged the development of a social contract early, and didn't penalize the players too heavily for not having a social contract among the group. This was done by limiting the total available court cards on player count, Adjusting the cost of the Court cards to acquire based on Kingdom Strength, Rewarding players for leaving cards in court, and lastly, having ordered quests (optional) that reinforce the social contract in the early game. Each one of these small tweaks helps to encourage players to be more invested in what players are doing - or these tweaks act as 'caps' so that players can't screw up things for their team too much.

New players tend to focus on themselves and acquiring personal power - this masks the traitors who would be smart to also make use of this tactic. New Loyal players do not yet know what is best for the realm, and thus do not make any demands of the group. It was interesting to try and fix this mechanically - to smooth out the learning curve for new players and to assist in them realizing where they may be going wrong. Loyals have a better chance of winning in an experienced group because of the social contract. This is one reason why the rulebook has tips on how to play - Unfortunately, one cannot just add in a social contract as part of the rules - at least not without some costly negatives. This would effectively null out many of the interesting strategies as it would override player choice. For example, If you couldn't buy Court cards early on in the game, then no social contract would be needed. Nothing would be learned or could be used as evidence to draw suspicion when a player capitalizes on this opportunity, as there is no opportunity there - no need to make a choice.


Why is there a Steward?
The Steward ensures that turn order is fair and balanced, with little to no luck involved.

Because of the above, even though the Steward picks the next Steward, it is better considered as a group decision. Thus, "the group" (who may or may not be influenced by traitors) picks the individual who will decide turn order.

Turn order has a significant effect in Act of Treason. Essentially deciding who can attack first. Attacking first is a big advantage in Act of Treason. Because of this, turn order cannot be randomized as this would mean the victor is decided by random chance rather than player skill and choice. As you can see, the concept of a Steward or something similar becomes almost a requisite in a game like Act of Treason, where Player turn order is so critical to winning.

I personally dislike games where arbitrary turn order, or seating position can have an effect on your chances of winning. I've managed to mitigate this by having a Steward who picks turn order. There is no randomization, there are no ties. All is fair - and determined in a very social way.

Yes the Steward role is powerful, but it is easy to misuse power and lose just as easy as it is to use it and win. For this reason, I do not think it is overpowered. Anyone can whisper in your ear and have you harm your own team.

The real power is in being able to correctly figure out who to trust and not trust. Or persuading others to trust you. Once you have that, you don't need a Steward Role. In fact if you were the most trusted player at the table, the Steward Role is mostly useless to you. Players will protect you and kill those who try to attack you.

My conclusion is that, yes, the Steward Role is powerful - but not by itself - it is certainly not overpowered to the point of imbalance.


Are the Quest effects necessary? Can Quest effects cheat players out of a win?
Quest cards have an effect that come into play as soon as they are picked as the Active Quest. The Quest effects give for a changing landscape that the players must adapt to. There are some positives and negatives to this, but I took Act of Treason in this direction as it creates for a more interesting strategic game in my opinion. The cost is that there is a slight increase in complexity.

Quests can provide some powerful effects at times, however, they are known well in advance. As such there isn't luck involved. A Quest that allows the first assassination of the round to be unblockable is known in advance, and can be accounted for. If you suspect a player suspects you are the Heir, you can take actions to prevent them actioning this Quest Effect.

I wouldn't say that a Quest effect can cheat you out of a win, only that it can provide the opportunity for a win/loss if you let it.


What stops the Steward Role from 'bouncing' between two players?
There is no rule against this as this should be self correcting.

Early game this is inconsequential and a fix would only serve to add more rules without significant benefit. Late game, this can be a balanced and valid strategy.

Most players dislike it when two players pass the Steward back and forth early game. The bouncers aren’t buying themselves any favors as this usually results in some animosity towards them. These bouncers are likely hobbling themselves for late game when they will have to rely on their teammates to win.

Furthermore, only the Traitors know who are on their team in the early game. What benefit is it to bounce the Steward back and forth when you cannot be sure of who you can trust?

Needless to say that 'Steward bouncing' is not a great strategy, and the Steward usually gets passed to other players in time.

Lastly, while this could be corrected for in the rules, this would restrict player choice. Perhaps a situation could arise where only two players are seen as most trustworthy early game, and this decision is echoed by the group. eg: during the first Quest, two players put in a hefty four knowledge cards each, and this wins the Quest for the group. In this example, should the two players be allowed to pass the Steward back and forth? I certainly think so.

Ultimately, Act of Treason is about group dynamics. I don't want to restrict how the group interacts unless it can't be helped.

Tune in next time for the following:
Why aren’t there more Examinations in the game?
Why are there lots of ways to get Examination Blocks?
Why do players gain Examination Blocking if they Examine?
Why does the Steward get to reward a Court card if the Quest passes?
Why are the Quests ordered?
Posted by Act of Treason at 16:09