Today I am excited to announce that on Saturday 12pm on the 10th of Feb Act of Treason is planned to launch on Kickstarter ( Friday, 9th,11:00 am GMT). 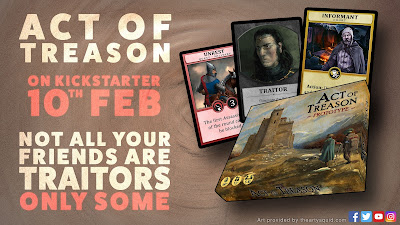 To aid in a successful launch I will be running a promotion leading up to the release date. As previously mentioned I've been toying with bonus "Social Media" stretch goals to help spread awareness of Act of Treason before the Kickstarter goes live. After much deliberation I have landed on going ahead with this plan, and aiming for 4,000 followers which should be an obtainable goal. That should be enough to help me to secure funding for Act of Treason.

4,000 may seem like a lot to some of you. I have laid out my rationale below which I help explains where I'm coming from. I'm trying to choose a number that will yield a successful Kickstarter - nothing more.

To reward all of us for hitting 4,000 followers, I will personally turn my pockets inside out and lay down *double* of the budgeted money for both the Art of the final product as well as the Marketing during the Kickstarter campaign. This helps me and it helps you. I get to make a more beautiful product that I can be prouder than a gushing parent over - and you can have a nicer, better looking game that you can love playing with your friends. We all win!

Note that there are additional art budget increases in the kickstarter stretch goals as well. So even if we don't hit this goal, there is still plenty of opportunity to fund even better kick ass art for Act of Treason.

It's easy to just say doubled - what does that actually mean? Well, for the Art, the current baseline  budget is ~$5,000 USD. Which is roughly break even when hitting the Kickstarter funding goal. This will double to ~$10,000 USD if we hit 4,000 followers! Marketing during the kick starter is currently set to $2,000 USD. Naturally this will increase to ~$4,000 USD. Keep in mind, marketing doesn't just help me! More marketing means more pledges and more pledges means hitting stretch goals. It means even more budget. It means economies of scale. It means negotiation power, etc.  Ultimately, this all leads to an even better product for you!

So, How'd I settle on 4,000? Well previously on the blog I've floated the figure of 1,000 eyes on, within the first 24 hours. Or even better 1,000 pledges within the first 24 hours. I have been assured by others and my own research that this is a good step in the right direction, and will definitely help to reach a successful kickstarter campaign.

In order to reach 1,000 I figure that we'll need more than 1,000 followers. The conversion rate for each social media account I have isn't likely going to be 100%. I imagine that for twitter I'll have a very low conversion rate of say 10%, and for the email list I will expect something along the line of 70%. Because of this I definitely need more than 1,000 followers across all social media if I want 1,000 pledges within the first 24 hours.

Also to note, nothing stops people from signing up to more than one social media channel - which is fine. However, what this translates to is an even lower conversion rate for each social media channel. For example, the same follower could be spread across 4 different media channels, but would only result in one sale. Because of this I would imagine that 4,000 is at least the bare minimum needed to get that delicious 1,000 within the first 24 hours. If anything 4,000 could be too low - but I want to set an obtainable goal for you all that incentivises both you and me to make this project a success!

Note there will be some foot traffic from Kickstarter as well as marketing traffic from my advertisements. So naturally we will get a few bonus pledges that won't come directly from followers, but the more we get in the first 24 hours increases our chances of hitting that glorious front page and getting that prime spot on that Pareto distribution.

4,000 Followers just seems like a good start to me. Who knows, if we happen to hit 4,000 quick enough I can always offer another bonus reward!

Here is our progress so far:

It's looking pretty nice so far, but we only have three months to hit that 4,000 follower goal!

Now, as alluded to above, I believe the email signups are a much stronger indicator of interest than the other social media follows. Because of this I have offered a very nice x3 bonus for *all* email signups - the strongest indicator to buy of all the social media. After all, an email signup is someone who has taken the time to sign up either using a link on the blog or from the website - they aren't just looking for a follow back.

This is reflected on the graph above, so the actual number of email signups is around ~25 at the moment, this gets boosted to ~75. If you wish to help me out, you know what to do.

Thank you to all of those who have followed the journey so far and I hope to open my arms and invite many more of you in the coming weeks!

The Part One of the Design Journal was quite well received, which I am humbled by. I'm glad to see people enjoyed reading through it and hopefully they gained insight from it. In the pipeline is part 2 of the Design Journal and I will be also running a series called The Dominant Strategy, where I will be talking about all aspects of game design, game theory, and game analysis. This is inspired a little bit from the stonemaier blogs which discusses all things related to Kickstarter. A fantastic resource which I hope anyone looking into releasing a game on Kickstarter checks out - A ton of great info there! Well I want to do a similar thing, but for Game Design! The first article of The Dominant Strategy will be "What makes games fun", and I can't wait to share it with you!

Both part two of the Design Journal and Article one of The Dominant Strategy will be posted up in the next week or two.

Until next time squad fam.

Music of the Week