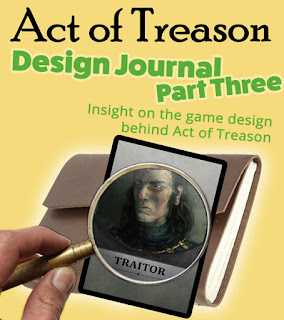 Why aren’t there more Examinations in the game?
I’ve deliberately put many opportunities to gain Examination Blocking and few opportunities for players to examine other players in Act of Treason for very good reason. If too much information is given out as to the loyalty of the players then the mystery and tension of the game is stripped away. Players can narrow down the suspects and simply make a plan to win, eliminating those they need to - there is no more unknown - The fun gets sucked right out of the game almost instantly and the game becomes an accounting exercise to wrap up an who wins.

If you know too much, then Act of Treason is no longer a game of intrigue and deception, and the whole point of the game is lost. I’ve witnessed this effect many times during my early playtests, and because of this, I’d rather have too few examinations than too many. You need to keep the suspense of who is who right up until the very end of the game for the maximum fun.

As it currently stands. Act of Treason has a good balance. You won't get too many examinations to reveal too much, and it's highly likely you'll get one or two - enough to encourage suspicion, interaction, and added conflict.

Why are there lots of ways to get Examination Blocks?
Sort of the inverse question to the one above. Examination Blocks gives both the Heir and Traitors the ability to pick up these cards without being too suspicious - after all if there are so many it's tough to avoid them... right? This makes getting an Examination Block less suspicious.

Added to this, you don't want the game flooded with Examinations, as noted above. Players will have to adapt their examinations to the blocks that are currently in play - It just makes getting clear information that much more tricky, which is a plus. In my opinion, there definitely isn’t too many examination blocks. I’ve never seen full saturation of Examination Blocking - there’s always been at least one person at the table who can still be examined by the end of the game.

Depending on your loyalty, the trick is trying to get an examination block as inconspicuously as possible! At the very least you may want to try to stop others from getting them, or use the opportunity to throw suspicion on them if they do!

Why do players gain Examination Blocking if they Examine?
'Chaining' examinations is a very powerful strategy that has been used in previous editions of Act of Treason. What is 'chaining'? It’s when player A examines player B and then Player B examines Player C. By 'chaining' examinations in this manner you gain an extremely strong sense of who is who, to the point of sometimes actually knowing for certain. A can’t be lying unless C is on their team, and so forth, The larger the chain, the stronger the information. This is very bad for he game as mentioned in 'Why aren’t there more Examinations in the game?' The fun gets sucked right out if you know too much!

As an added negative, this gives examinations so much power that players were incentivised to get Examinations at any cost. Worse still, the strategy was only dominant for the loyals, and yet the Traitors would be forced to go along with it or risk exposing themselves as a Traitor! This created a terrible dominant strategy that removed all meaningful choices from the game and replaced them with "buying Examinations so that you can chain them".

Examination chaining was removed from the game early on. Now, Examinations are both scarce and they can never really be proven to be correct because 'chaining' has been removed. This keeps the mystery of the game going. In the current iteration of the game, players who examine others or who get examined gain examination blocking - this is what prevents examination chaining. I trailed this in a few games a while back and have never regretted my decision to add it to the game. This is a very good mechanic to have because it keeps distrust and intrigue going, and if anything it adds to it!

Why does the Steward get to reward a Court card if the Quest passes?
The Court is where players can go to purchase cards that give them additional powers and effects. A Court card must be purchased buy spending Knowledge. Since Knowledge is used to pass Quests, players will be lowering the chance of the passing the Quest that round, and potentially subsequent rounds.

This has mostly been covered in parts 1 and 2, but simply put, the Court is restricted to put a limit to the amount of damage that players can do when acquiring cards from court - knowledge spent on court card can't be used to pass Quests for instance. Likewise, allowing the Steward to reward any left over cards in Court is a nice free bonus that rewards players as a group for not just buying cards outright.

Without these mechanics in play, new players have a strong tendency to purchase cards without knowing why it’s the wrong time to buy, or what it means. Then some new players may blame the game rather than realise the fault was with them. With these mechanics in place as well as the tips in the rulebook, players are more likely to build up the understanding that buying without solid reason is the reason for their downfall, not the game or anything else.

Why are the Quests ordered?
This is highly related to the point above, and why it is recommended that advanced players play with the Quests unordered and randomised.

For beginning players, playing with ordered Quests is somewhat like playing with training wheels. In blind playtesting some players would leap into tactics that were quite destructive without realizing. This could lead to them blaming the game for their actions, not realizing that they were "playing the game wrong". Now as a designer I don't believe players can play a game wrong, so I needed to provide a clearer incentive and push for players to play in such a way  I covered this before with the social contract as discussed before.

I've found that using ordered Quests help to keep the kingdom nice and controlled in the early game, with some of the more dangerous cards coming out near the end game to help facilitate conflict. This guides players into the the social contract and tactics that keep the game on course. When the Quests are unordered, players will have to organise themselves to ensure that they stay on track and that Quest and the Court cards aren't misused by the other players.

Why do you have a Deception Phase?
I've played a lot of games both with and without a Deception Phase, and with many different groups. The consensus is that including the deception phase is more fun and allows for more tactics with your Traitor friend. That said you don't have to include it as stated in the rule book. Optional rules exist that allow you to play without it. In fact for the five player game it's mandatory that you play without it.  Both ways of playing are equally viable, and in my opinion.

Why do you not reveal Loyalties after a player dies?
This keeps the suspense of the game going until the very end of the game. As discussed above, revealing too much can take away the suspense, and locking down a players loyalty after they die so that they cannot be examined adds yet another factor into if killing them is a good idea.

Tune in next time for the following:
Why is the Quest phase before the Action Phase?
Why do you discard down to 4 Knowledge cards each round?
Why is the cost of Court cards variable?
Why is there a Town Watch?
Are the Court cards balanced?
It seems way too tough for the Traitors/Loyals to win Tribute/the game?
Why do you not reveal Loyalties after a player dies?